Is Placenta Encapsulation Safe?
My own personal experience along with the experiences of my thousands of clients made me know this was true well before the study, but it is still validating to see. "The largest study of its kind found mothers who consumed their placenta passed on no harm to their newborn babies"
​
Maternal placenta consumption causes no harm to newborns - University of Nevada, Las Vegas (May 2018)
Group B Strep & Placenta Encapsulation
Being Group B Strep Positive (GBS+) does not mean you have the infection, it simply means you have a colonization. Group B Strep alone is not a contraindication for encapsulation. Many clients test positive when tested during pregnancy and even so this does not necessarily show actual status at delivery. I work with GBS+ placentas extremely frequently and I myself was GBS+ with my second, had antibiotics, and still safely encapsulated. I am happy to answer any questions or concerns regarding this, so please never hesitate to contact me.
​​
It is also important to note that PlacentaMom only offers Traditional Method preparation, which is both steamed & dehydrated at food safe temperatures for recommended lengths of time. Research from Dr. Sophia Johnson with Jena University, verifies that this kills bacteria, such as GBS. Her research concluded: "The preparation of placental tissue has a clear effect on the microbial contamination: dehydration causes a drastic germ reduction, steaming followed by dehydration causes an even greater reduction of microbial species. Regarding to foodstuff regulations of the European Union, no “unsafe” organisms were detected in our samples." Additionally, more recent "GBS Project" research from March 2022 by Dr. Johnson confirms earlier findings with "Our results suggest placentophagy of processed tissue is an unlikely source of clinical infection." 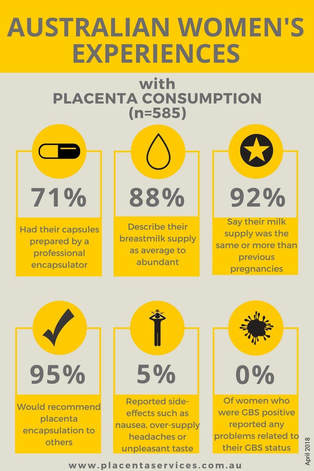 This survey was among Australian women and was taken by an organization with interest but their experience still counts & I would say the experience of PlacentaMom clients would mirror this as well.
Milk Supply & Placenta Encapsulation (Lactation)
​Research does show evidence that dried placenta positively affects milk supply, with 86% of people in the experimental group having significant increase in milk production within four days of taking placenta. However, this study does not conclusively uncover how placenta affects milk supply, but narrows down the variables.

Due to these findings the focus of how placenta affects milk supply is on its hormonal content. The placenta retains hormones upon the birth and these hormones could be positively affecting a person's milk production. However, more research needs to be done to examine more thoroughly how specific placental hormones, such as prolactin and oxytocin, affect lactating people. The question now is not if placental hormones play a role in milk production, but which hormones or combination of hormones are the key.

The reasons for Placentophagy are more complex than simply being a necessity for cleaning the nest. This theory is often brought up as a way to keep offspring safe from predators, but it is important to examine instances of placentophagy that would disprove this theory. One instance is that animals without predators will still consume their placentas despite not being in harm's way. Also, animals that birth offspring that are able to leave the nesting site will remain behind until the placenta is consumed. In addition animals that do not birth in nesting areas, but high in trees will retain their placenta for consumption instead of letting it fall to the ground. Most importantly merely consuming the placenta would not leave the nesting site clean and prevent potential predators from harming the offspring as blood and fluids would still remain and act as an attractant.

In addition to the cleaning the nest theory and placentophagy there are also ideas that suggest birthing persons have a shift in food preference towards carnivorousness at the time of birth, that they are generally hungry due to not eating during labor, and that they have specific hormonal and nutritional needs after their birthing time that a placenta would satisfy. Though these theories attempt to describe the reasons for placentophagy they also fail to adequately explain why they consume their placentas in all cases.

A more sound theory for placentophagy is that of an evolutionary basis. Digestion of the placenta may actually affect the birthing person's immune system since the placenta contains factors which would prevent their body from creating antibodies as a response to antigens in the baby's blood. People who are Rh-negative are encouraged by their physicians to get a shot of Rhogam to help prevent their bodies from creating high levels of anti-Rh antibodies. The creation of these antibodies could make any subsequent pregnancies of a Rh-positive baby difficult due to their body mistaking it as a threat. Placentophagy may in fact be a natural antidote to this antibody problem that mammals have adapted over time.

Both iron deficiency and fatigue can impact the development of Postpartum Depression (PPD) by creating a vicious cycle of ailments that Placentophagy could help with, or help to avoid. The vicious cycle begins with iron deficiency being prevalent in people of childbearing age. World estimates state >50% of this population are affected. Having iron deficiency results in many symptoms, some of which are: an impaired ability to concentrate, impaired physical work capacity, depressive symptoms, and fatigue. These symptoms are often overlooked or misdiagnosed due to postpartum people dealing with the lifestyle changes of having a new baby in the house and attributing these symptoms to these changes.

Unfortunately overlooking or ignoring symptoms of iron deficiency, such as fatigue, and not providing proper treatment can lead to the next step in the cycle of PPD development. Research has shown that early postpartum fatigue plays a significant role in PPD. This fatigue adds to the stress of raising a newborn and adjusting to the changes taking place and can hinder a postpartum person from reaching their maximum potential within their role as a parent.

Early screening and treatment of both iron deficiency and fatigue is necessary to reduce the chance of PPD developing, especially since people with PPD respond best when treatment is received at early onset. Placentophagy can be part of this early treatment and help postpartum people avoid both iron deficiency, the fatigue that often accompanies it, and PPD. Several health findings have shown that PPD does respond to iron supplementation and placentas contain iron that can aid in replenishing a postpartum person's iron levels. A person's placenta, when ingested, can help stop the vicious cycle that so many people endure after having a baby.

Research indicates both that postpartum depression has a biological cause and that placenta contains hormones that may assist in the treatment of this disorder. Links between low levels of stress-fighting hormones and the baby blues support the theory that during pregnancy the placenta plays a large role in hormone production, and after birth it takes time for the brain to balance the production of these hormones since the placenta is no longer involved. By ingesting placenta during a person's postpartum recovery period they would be reintroducing these hormones into their system until their brain takes over in signaling production once again; helping them to prevent postpartum depression from setting in due to low hormone levels.

Despite research not showing a strong causal relationship between specific hormones and their roles in postpartum depression it is important to note that the existing research is flawed. Conflicting results have been found due to studies lacking controls for the wide spectrum of variables regarding postpartum women and postpartum depression onset. It is important to acknowledge that certain hormonal changes may in fact contribute to depressive moods in certain postpartum people, but further more reliable research is needed to understand this complex relationship.

Placenta would be a beneficial addition to current options for pain relief that post childbirth people currently have. The research shows that ingested placenta increases the effectiveness of opioids. Placenta would then allow people to take less opioids for pain relief, but still have a positive relief of pain. Taking less medications would result in less negative side affect for new parents, such as a decrease in responsiveness. Despite placenta not working as an independent form of pain relief and not working with other pain relief options, such as aspirin, I still believe that it should be an alternative option that birthing people have available to them during their postpartum recovery period.